Disappointing news for New York City ferret lovers rolled in earlier this week as the city’s Board of Health ruled to uphold the long-standing ban on owning ferrets as pets.

Sadly, only 3 board members voted in favor, falling far short of the 6 votes needed to lift the ban. “[Ferrets] seem to be uniquely problematic,” stated one official–a comment quite typical of the pervasive, incredibly vague yet intensely negative attitude toward ferrets we’ve been hearing from New York City for quite some time now. 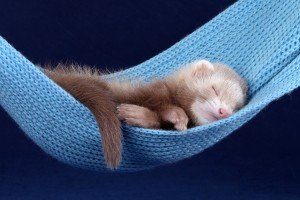 Ferret ownership has been illegal in New York City since 1959. Lest anyone forget, in 1999, mayor Rudolph Giuliani pronounced a ferret advocate “deranged,” proclaiming that “excessive concern with little weasels is a sickness.” Note the glaring lack of substantive evidence as to WHY someone who advocates for ferrets must be deranged or mentally ill.

Regarding the current decision, New York City health officials cited a fear that ferrets are more likely to escape and become feral because of their “unique skeletal structure.” A fear that is completely unfounded, since feral ferret populations are not an issue in the United States, as evidenced by the fact that not a single state with legal ferret ownership has subsequently repealed the decision. Are things so much different in New York City than the rest of our nation–or the rest of their own state?

For the record, Marshall spokesferrets Tyrone and Trixie currently reside in Chicago, where their “unique skeletal structure” hasn’t aided them in much beyond wiggling themselves into new positions for snuggling and treat-begging.

“New York City’s Board of Health voted not to overturn the decades-long ban on owning ferrets as pets on Tuesday… a travesty of justice for a number of reasons,” wrote Dave Bry for The Guardian this week.