Today, April 2nd, 2015, is National Ferret Day, which is officially defined as “A day to educate the public to respect this lively and intelligent companion animal — the domesticated ferret. This day is also a time to focus on such ferret issues as welfare, care, nutrition and responsible ownership. Annually April 2nd (in the United States).” 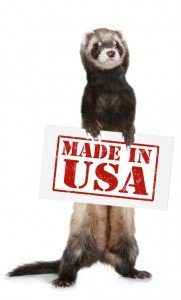 The first official National Ferret Day was last year, on April 2, 2014, although ferret enthusiasts have been celebrating the occasion for almost twenty years. But thanks to one hardworking ferret lover, Carol Roche of New York, it is now an official observance. She took it upon herself to learn how to make a day an actual, official day–in other words, to get it officially recognized by Chase’s Calendar of Events, which is basically the worldwide reference for special events, holidays and days of observance.

When Roche learned that she needed a sponsor for her application, she went to the American Ferret Association, who were more than happy to be a sponsor and put a link on their website. So after her hours of research and hard work, it all paid off when National Ferret Day became an official Day!

And, just like it’s spelled out in the official definition, National Ferret Day is about much more than celebrating how cute and fun ferrets are (though we can certainly do that all day, every day!) It’s also about focusing on ferret welfare, wellness, nutrition and responsible ownership. There are many misconceptions about ferrets, and it’s up to responsible owners like all of us to help spread the word so people can know what great pets they are.

Every year, ferrets get more and more popularity and recognition. Let’s help the wave continue all year long!